News Direct CEO Gregg Castano founded the innovative newswire approximately one year ago with the intent of transforming the way public relations and investor relations professionals distribute the latest news and earnings reports. Utilizing his experience as the former president of traditional wire service Business Wire, he designed this state-of-the-art platform to revolutionize the dissemination of information in the digital age.

In this insightful Q&A, Castano explains News Direct’s origins, goals, extraordinary features, and how it has reimagined the news distribution process.

Q: What inspired you to create News Direct?

A: “I spent over 32 years at Business Wire, which is one of the two leading players in the business. For nearly eight of those years, I was the president. What I saw—during the last few years, in particular—was the emergence of digital technology and how that was affecting media and media consumption. Essentially, what was happening, as we all know, is that the younger the generation, the more likely it was that they were getting their information via multimedia. They were gravitating toward digestible bites of information.

“When I was at Business Wire that was really just starting to happen, but it became apparent that it was going to build and grow. I realized we had to prepare for a transformation to a completely digital environment, but I got frustrated because I felt as though they were not taking that seriously, and I believed that was kind of an existential threat—not just to Business Wire, but to the whole industry, because the industry was also not following suit. That was step one.”

Q: When did you decide to officially form the company?

A: “I decided that, in addition to being an existential threat, it was also an opportunity. I realized I could capitalize on not just the ability to send multimedia, but to use digital technology to really transform the business model into one that people today would feel comfortable using.

“I think if you talk to most people, they will tell you that the workflow and the user experience of using a traditional wire is kind of old school. It's manual, it's slow, it's not particularly secure. And it doesn't need to be that way, because the technology exists to make it better. So I wanted to make it better and bring it into the modern era.

“When I decided to build this, I brought in some ex-colleagues, including the former Business Wire CTO, who left a couple of years after I did.  Between him, myself and a few other key former colleagues, we started to design something from start to finish that was very different from what people were used to.”

Q: How has distributing press releases and news changed over the years and how can News Direct facilitate the modern way people interact online?

A: “Essentially, we automated the process. We provide greater efficiency and control for the PR professional by leveraging the latest technology and automation. We also cut out the middleman by eliminating editors. Most of what they do can be automated using technology and that's what we've done. Now, when you want to put out a press release, instead of sending it to someone who then processes it, you copy and paste it onto our platform. The work is done for you. There's very little you have to do once it's posted into our Content Studio, because all formatting is retained from the original document. We also have all the familiar editing functionality including spelling and grammar check—and even AP style check.

“We also felt as though the traditional press release workflow could be transformed. Typically, an offline process involves a lot of other people. There's legal, PR, and finance who get involved in the creation of that press release. As a result, you get a lot of different documents flying around in email or in Google Docs. It’s disorganized and not necessarily secure. So we included a collaboration tool on the platform that allows the administrator—the person who's in charge of that news release and that account—to invite any other stakeholders. They send them an email with a secure link that leads directly to that piece of content where they can review and comment. You have everything organized and secure all in one place.

Q: Why did you update your pricing model from the traditional newswire model?

A: “A traditional wire service can be very expensive. Your final payment is based on two things: One, geographic selection. For instance, metro New York won't be as costly as national distribution. And two, word count. The base price covers up to 400 words, then you pay additional incremental fees beyond that. So, the longer the press release, the more expensive it becomes.

“We felt those two payment metrics no longer apply. When you're choosing a geographic distribution, online news release postings are included so your content is already broadly viewable. Charging more for national versus regional or metro, we felt, no longer made sense. The word count is also a relic of the distant past. They used to have to send a hard copy to the newswire, which would then be re-typed by editors and input into the system. Now, we’re sending in Word files, Excel files, etc. So, again, the up charge for more words is no longer warranted.”

Q: How has the addition of your proprietary standalone multimedia capability transformed the distribution process?

A: “With a traditional wire service you can send out multimedia, but you are required to embed it within a press release, which takes time to write and costs money. But we recognize, in this content-rich world we now operate within, that there is a lot of multimedia content that is engaging and informative on its own—not always requiring a lot of text to set it up or explain its relevance. We also knew we could offer an efficient way to amplify this content beyond placing it just on owned properties. We developed our Digital Asset Direct™ release so customers could quickly and easily reach our expansive network of journalists with their video or infographic—and we know journalists are hungry for this sharable, easy-to-consume content as well."

Q: Why was it important to custom-build features for IR professionals?

A: “The newswires traditionally make a lot of their money on earnings, which can be 14 or 20 pages, because they charge by word count. Because we use a flat fee per asset model, it doesn’t cost thousands of dollars to put an earnings release out.

“We recently rolled out SimpliFi, which stands for simplified financials. Essentially, it allows you to transfer tabular data from a Word document into our platform while retaining all the information. For instance, a typical earnings release could contain four or five pages of tables that take hours to perfectly format. When traditional wire services transfer that to their editorial system, all the formatting disappears, so they have to spend another few hours reformatting it, then send it back to be reviewed by the client.. Oftentimes, they find some errors, such as a missing number or dollar sign, and then have to send it back to the wire to be corrected. Our developers have figured out a way—and it took them six months to do this—to transfer Excel tables into our platform without losing virtually any of the formatting.

“It’s much better, not only from an efficiency standpoint, but also from a security standpoint. If you're a large national bank, for example, and you're sending out your earnings after the financial crisis, after coming under scrutiny by the government, you’re sending it to a traditional wire service representative. This guy working on the earnings was some 26-year-old person who didn't know what they were looking at, and had access to information that the rest of the world is waiting for. The banks realized that was a huge security risk. Internally, they decided they cannot send this information outside of their environment to process before it's been disclosed.

“Our process eliminates that entire risk, so we think ultimately—and this will take a while, we're not naive—the large banks will see that they can get the best of both worlds. They can have all the security they want and never have to surrender possession of their pre-market content, and never have to let anyone outside of their internal environment view it before it's been distributed.”

Q: Because your process is automated, how can customers receive assistance navigating the platform?

A: “While our process is automated, it doesn't mean you are on your own. We have an incredible, experienced customer success team. At the beginning of your journey with us, our team will hold your hand until you're 100% comfortable with the workflow. They’re available 24/7 on live chat or by phone. With the other newswires, human involvement is mandatory, whereas ours is sort of opt in if you need help. For security precautions, our reps cannot access your content while they’re helping you. All content is encrypted and accounts are secured with cloud isolation technology. A user must grant permission for us to access their Content Studio in the platform. In fact, News Direct has the highest protection protocols in the industry today.”

Reaching the Right Audience: How to Target Your Press Release Distribution

Every PR pro’s dream is to have their story picked up by thousands of media outlets and read by millions of people, resulting in brand recognition and increased... 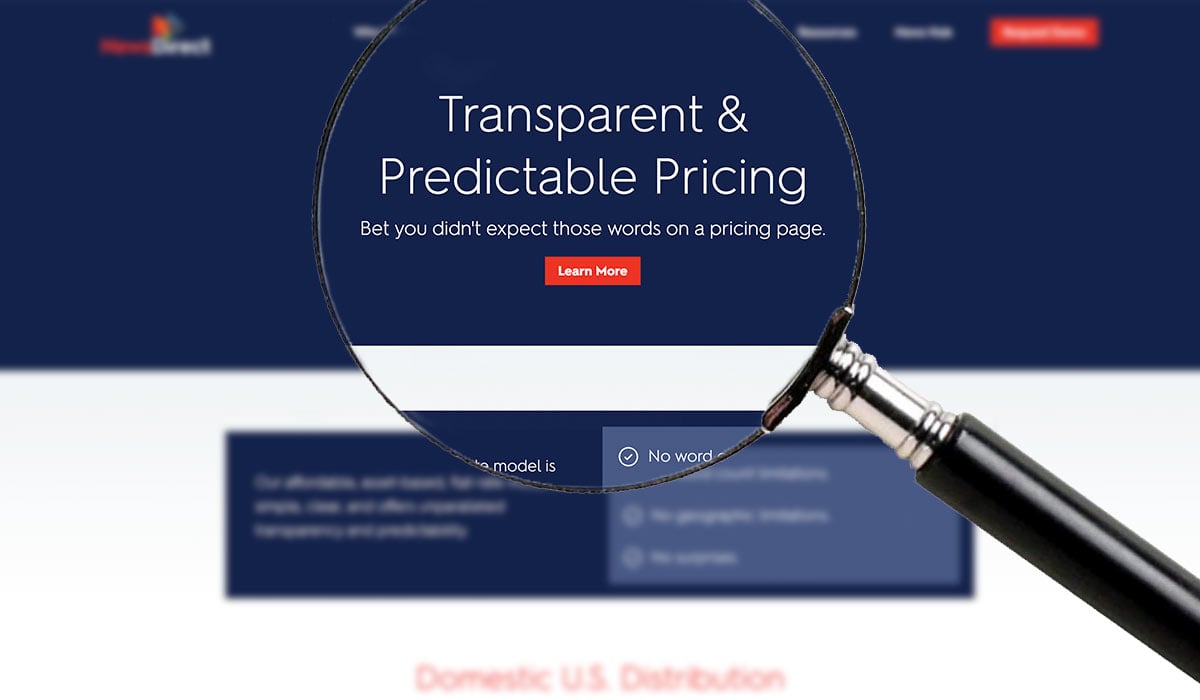 For most leading wire services, pricing is a taboo subject. It’s rare to find a price list on a traditional wire's website, let alone a simple starting price. And...