In a year when most craft fairs and festivals have been cancelled, ekologic cashmere clothing designer Kathleen Tesnakis of Troy, N.Y., is joining other artists in making the shift to online retail while keeping up the meaningful interaction between customer and creator. 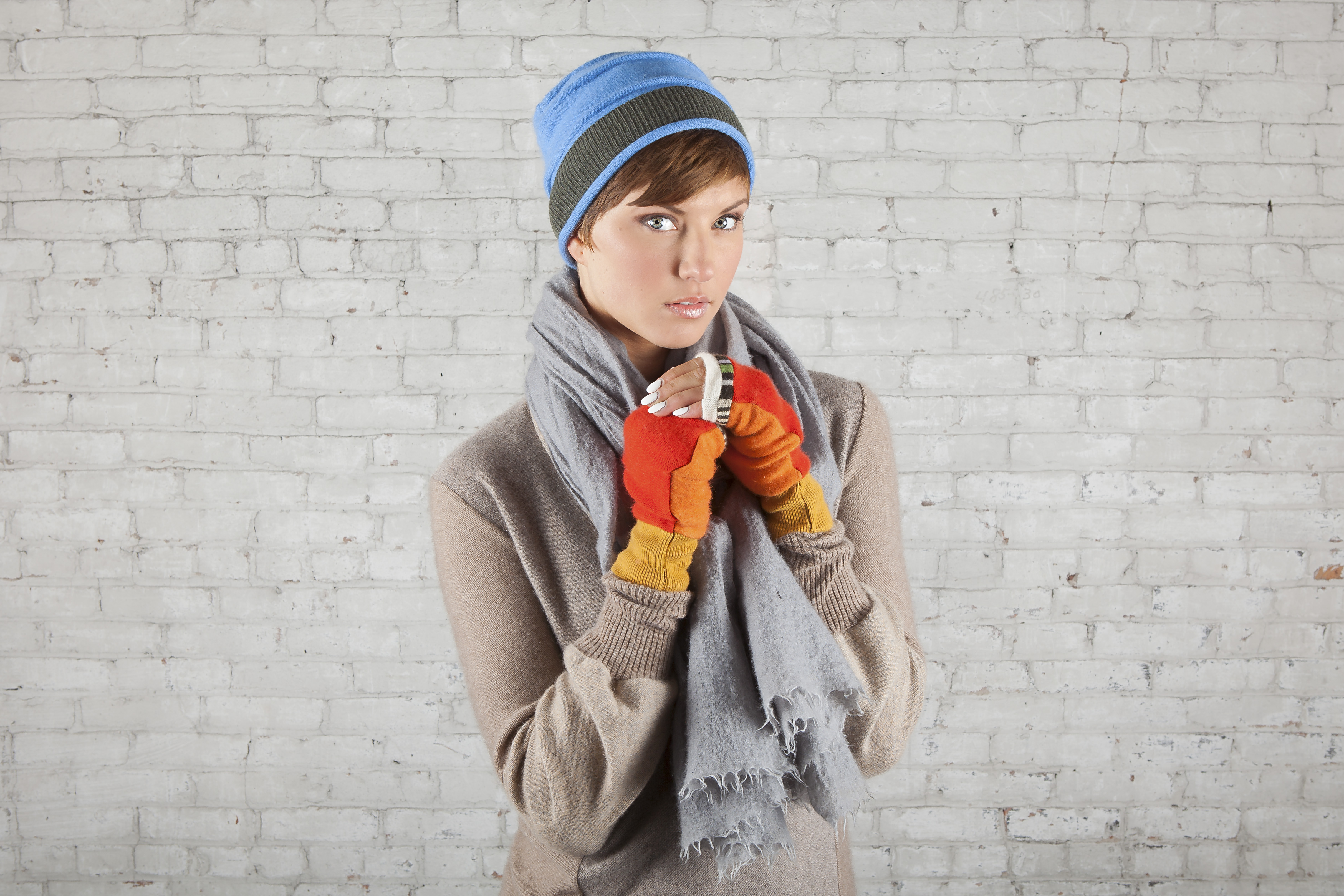 “This is the first November in eight years that my partner and I haven’t had to wake up at 4 a.m. to pack a rental van with a year’s worth of ekologic inventory, then drive from upstate down to Manhattan to set up an entire shop in Grand Central Terminal for the Holiday Fair,” said Tesnakis, who recycles cashmere to create new sweaters, skirts, hats and gloves. “Normally, we would spend the next month-and-a-half running our shop in Grand Central, overseeing our bustling studio in Troy and traveling between the two locations weekly to replenish inventory. It’s nice to get a little more sleep, but in normal years the Grand Central show accounts for about two-thirds of our annual revenue.”

This year, ekologic is a featured artist in the first ever Grand Central Virtual Holiday Fair, a web-based version of what organizers claim to be New York City’s oldest and largest indoor holiday market that beckons customers from across the world to shop in the Terminal’s historic Vanderbilt Hall.

Though Grand Central is most lucrative for her, Tesnakis said other art shows that occur across the nation throughout the year are no less important for designers like herself. She typically spends the spring and summer touring the country to sell her clothing line at various curated art shows in places like Dallas, Texas, Jackson Hole, Wy. and Portland, Ore. Those shows, all of which were cancelled this year due to COVID-19, account for the rest of ekologic’s annual revenue. Though the company has maintained an online store for more than two decades, the majority of her customers have preferred to shop in person, sometimes returning year after year to the same festivals and fairs.

“I think people really put a value on the experience of purchasing handmade items directly from the artist who made them,” Tesnakis said. “When you shop our online store, you’re still purchasing directly from us. But I recognize that some customers need a bit more help deciding what colors to chose, what size to pick… which is why I’m available for virtual personalized shopping appointments.”

Another way she connects with customers is through broadcasting on Facebook Live each Wednesday at 3 p.m. to share her production process and progress in the studio, as well as her philosophy on sustainability that guides her business practices.

Climate change and environmental pollution are major crises facing humanity and we have to keep pushing for more sustainable practices,” Tesnakis said. “We have to be more eco-conscious, even during a pandemic, because our planet’s ecosystem is in a health crisis, too. I hope people will keep that in mind as they do more of their shopping online this season. Also, there are so many small artisan businesses that need your support this year and the gifts you find will have an extra special meaning.” 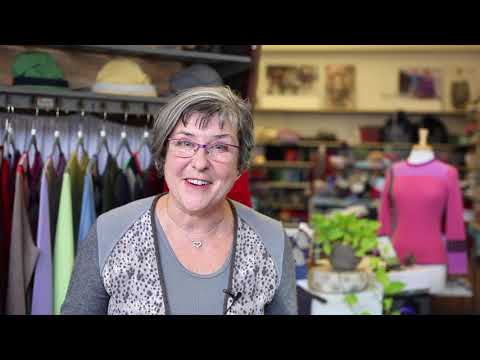 “‘Fast fashion’ is clothing that’s made fast and cheap, with questionable labor practices and ends up in a landfill quickly,” Tesnakis said. “It’s a wasteful, environmentally destructive industry that has to change.”

Since 1996, Tesnakis' ekologic company has practiced an alternative to “fast fashion” by recycling cashmere to create high-quality pieces including sweaters, dresses, hats and mittens in women’s and men’s styles that can be worn and cherished for generations. The ekologic mission is to make clothes that inspire a movement of sustainability and environmentally aware customers.

“We’ve been on the front lines of the slow fashion revolution for over 20 years,” Tesnakis said. “Our clothing is made to last and to spark conversations about the clothes we wear and the products we purchase.” 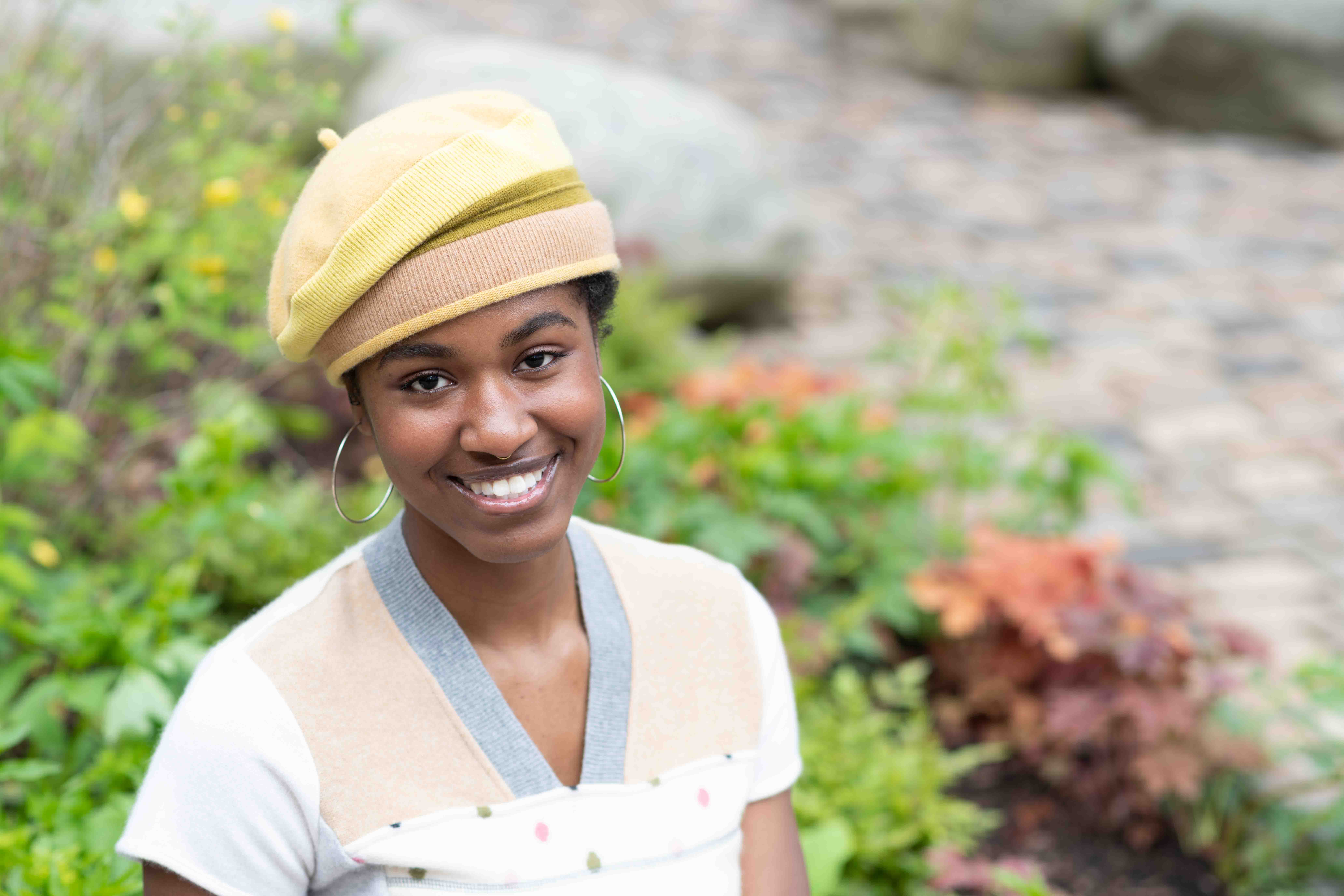 Beret and pepper sweater hat by ekologic, made from recycled cashmere (photo provided)
﻿

Every item made by ekologic is unique because of the way Tesnakis gathers and assembles her materials. After hunting down discarded cashmere treasures, she dismantles each article of clothing while taking the time to recognize its individual character and beauty. Finally, she transforms the material by joining it with other pieces to give an old garment new life and purpose.

The random nature of recycling means Tesnakis must work with the materials she finds. While ekologic’s product lines are consistent, each ekologic item is uniquely individual.

“Recycling informs my design and production,” Tesnakis said. “I don’t get to order trendy materials. It’s my job to make trends happen.”

ekologic clothing is sought after by the environmentally conscious and fashion conscious alike. Celebrities, like Lee Ranaldo, of the iconic rock band Sonic Youth, and celebrated actress Halle Berry have been spotted wearing ekologic apparel.

“In recent years, ‘green’ has become a powerful marketing tool that is sometimes used in cynical and disingenuous schemes,” Tesnakis said. “ekologic has been making genuinely ‘green’ fashion long before ‘green’ was fashionable.“

In 2003, the eco-clothing company moved from Portland, Ore. to Troy, N.Y. to be closer to the fashion epicenter of New York City and family. All of the cashmere that ekologic recycles into new garments comes from within a 150-mile radius in the “Tri-State” area, qualifying it as “locally harvested.”

Since moving to New York state, ekologic has repurposed more than16 tons of post-consumer clothing that would otherwise have ended up sold to international barges or landfilled.

The ekologic process of washing and deconstructing post-consumer clothing uses only environmentally-friendly soap–no harsh chemicals or dyes—while striving to use a minimal amount of water.

In 2014, ekologic adopted a “zero waste” production facility goal, meaning that even the smallest scraps of material are put to some re-use. ekologic has inspired other artists and manufacturers to use only post-consumer products and has forged new partnerships in order to achieve the “zero waste” goal.

"We know that being green isn't easy. It's a lifelong process. Don't be intimidated and feel like you have to change your life overnight," says Tesnakis. "What we're asking you to do is take the steps that are closest to you to change. If each one of us did this, we would have an incredible impact on the world." 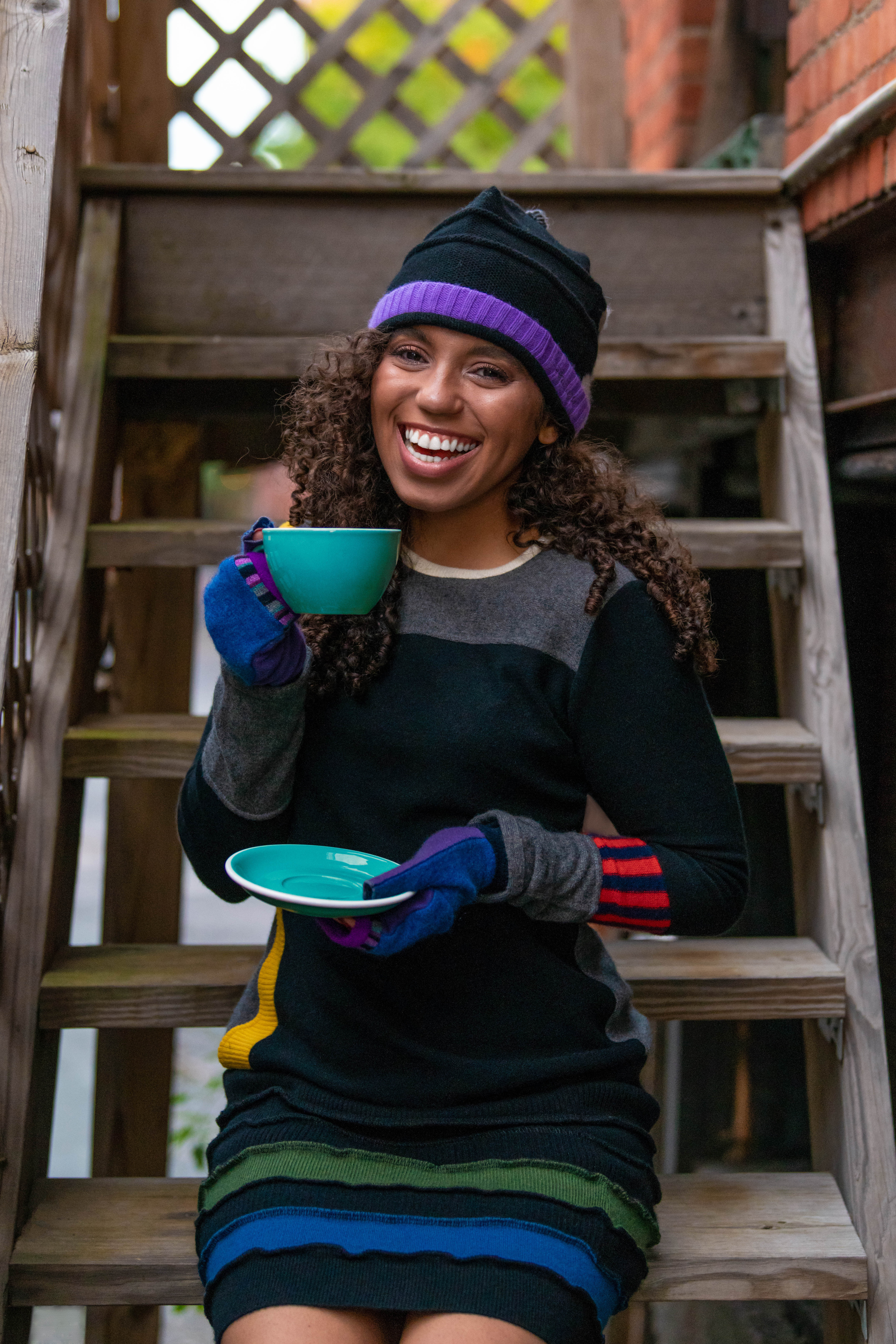 Clothing was far more expensive in the early 20th century than it is today, and therefore there was a greater incentive to transform and re-purpose old clothing items into quilts or toys, or even a smaller version of the same garment—a damaged or worn dress for an adult would often be repurposed as a dress for a child.

As clothing became cheaper, through outsourcing labor to developing nations, Westerners increasingly began to discard clothing items after one lifecycle or sometimes after a single use as in the case of seasonal fast fashion.

By the early 1990s, nearly all new clothing was destined to be landfilled within a matter of a few years. But Tesnakis says she recognized that there are a few materials, such as wools, that have characteristics that made them prime for recycling.

“Cashmere and wool are strong, antimicrobial natural fibers which helps them stay in good condition for generations,” Tesnakis said. “It's not uncommon for a beautiful cashmere jacket or a cashmere sweater to be still viable 20 to 30 years later.”

REMADE BY HAND IN AMERICA: CONTINUING A HISTORY OF WOMEN & TEXTILES IN TROY, NY

“Most people don’t know where their clothing was manufactured. Buying directly from the designer is a rewarding way to shop,” said Tesnakis. “When you shop ekologic, you know who made your clothes. You know how your clothes were made and what materials your clothes were made of. Those are the tenets of the slow fashion movement that will lead us to a fashion revolution.”

Tesnakis noted that Troy is nicknamed the "Collar City" because a woman, Hannah Montague, invented the detachable collar here in 1827. Later, in 1864, Kate Mullany started the all-women Collar Laundry Union in Troy, one of the first women's labor unions in history.

Tesnakis’ first studio in Troy was in a building that housed the Troy Waste Manufacturing Company which produced garments created from textile waste from the shirt collar industry 100 years before she got there. This year she opened a new studio at 184 4th Street in Troy’s “Pottery District” neighborhood.

This year, ekologic debuted the newly-designed “Jackson” sweater, a modern mosaic piece that achieves zero waste, and a French-inspired beret.

To help other artisans pivot to the virtual world, Tesnakis and four other women-owned businesses founded ArtPartyCentral.org to connect independent designers, artists and lifestyle brands with discerning, fun-loving shoppers online.

Art Parties are festive, engaging and intimate hour-long virtual events presented by six makers showcasing their newest pieces, current inspirations, a peek at their techniques, and sharing the love of their work in their own environments.