SINGAPORE - Media OutReach - 3 March 2021 - Cityneon Holdings ("Cityneon", the "Company"/collectively with its subsidiaries, the "Group") today announced another major historical artefacts exhibition, just weeks after revealing its foray into the artefacts space with Machu Picchu and the Golden Empires of Peru. Come November this year, Houston Museum of Natural Science and Cityneon will debut an exhibition of 183 pieces of rare artefacts from ancient Egypt that focuses on the almighty pharaoh, Ramses The Great. 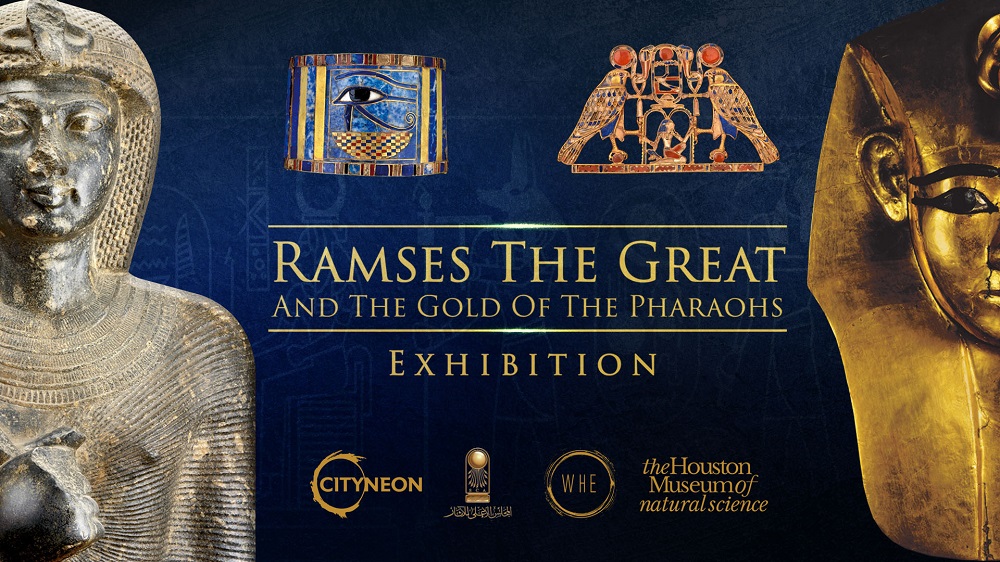 These 183 pieces of rare artefacts will be featured in the inaugural exhibition titled Ramses The Great and the Gold of the Pharaohs and the exhibition will open in Texas, United States at the Houston Museum of Natural Science.

Ramses II, also known as Ramses The Great, ruled for 66 years, which was the second longest reign in ancient Egyptian history. Because of his long rule, Ramses II is thought to have amassed one of the largest and richest burial chambers and is regarded as the most powerful pharaoh of the New Kingdom, the most celebrated period of ancient Egypt.

The exhibition is expected to attract large crowds as evidenced by previous showcases of Egyptian treasures worldwide. In 1986, a touring exhibition on Ramses II sold a record of about 5 million tickets. As recent as in 2019, when Tutankhamun: Treasures of the Golden Pharaoh was exhibited in Paris, it broke the French visitor record with about 1.5 million visitors. Egyptian expert Gamal El-Din Mokhtar once said that the Ramses II exhibition had exceeded the experience from the Tutankhamun exhibition by being "more exemplary archeologically, historically and culturally than the treasures of Tutankhamun".

Fast forward to 2021, Ramses The Great and the Gold of the Pharaohs would be even more exciting than the past showcases. The exhibition boasts the FIRST virtual walkthrough of Ramses II's famous temples and will include a FIRST full-length documentary ever produced on Ramses II's tomb for this tour. Details of the documentary will be released in due course.

Mr. Ron Tan, Executive Chairman and Group Chief Executive Officer of Cityneon, said: " The priceless artefacts in our care, as well as being given exclusive access to Ramses' tomb allow Cityneon to stage an authentic and exhilarating recount of his life. This is the first time after 32 long years that people all over the world will have a chance to get up close to the life of the greatest pharaoh of all times. From the record-breaking sales of about 5 million tickets from the Ramses II exhibition in 1986 to the recently achieved visitorship for the King Tutankhamun exhibition in Paris in 2019, we are confident that Ramses The Great and the Gold of the Pharaohs will be another record-breaking feat ."

"Cityneon is thankful to work with partners as established as the Houston Museum of Natural Science and the World Heritage Exhibitions, and we are also honoured to have the support of the Egyptian government. I am very excited for the Cityneon team to showcase these remarkable pieces of artefacts to the world," Mr Tan continued.

Mr. Joel A. Bartsch, President and Chief Executive Officer at Houston Museum of Natural Science, said they were honoured to be launching the exhibition with Cityneon and World Heritage Exhibitions and they believe the Groups' extensive experience in exhibitions would lead to an engaging showcase. "All three teams have great track records and we are confident that the 183 pieces of Egyptian artefacts will captivate visitors from around the world. We look forward to hosting visitors from Houston, the nation and beyond at this historical, educational and immersive exhibition," said Bartsch.

Mr. Anthony Tann, President of World Heritage Exhibitions, said: "We are extremely honoured to partner Cityneon for yet another artefacts exhibition. I am confident Cityneon will bring their incomparable expertise to the table and bring alive the treasures of Ramses II to cities across the world, welcoming the many millions of visitors globally."

Cityneon has assembled an experienced team who would be able to handle these precious historical treasures and launch the exhibition across the globe. The Group is also riding on its expertise in the curation of intellectual property experiences to build up their capabilities in the artefact exhibitions arena.

Cityneon now has two global and major artefact-related intellectual property and has plans to acquire more historical artefacts IPs, with one from Asia expected in 2021.

﻿
Cityneon Holdings
With its global reach and international partnerships, Cityneon has the capability to serve its clients anywhere in the world. Cityneon was listed on the Mainboard of the Singapore Stock Exchange since 2005, and was privatized on February 2019 by West Knighton Limited, a company wholly owned by Cityneon's Executive Chairman and Group CEO, Ron Tan, together with Hong Kong veteran entrepreneur and investor, Johnson Ko Chun Shun. Johnson is a capital markets veteran and has held controlling interests and directorships in many listed companies. In May 2019, Cityneon welcomed CITIC Capital as a new shareholder, who holds approximately 10% shares in Cityneon. CITIC Capital is part of CITIC Group, one of China's largest conglomerates, and has over US$29b of assets under its management across 100 funds and investment products globally. Other institutional shareholders of the Group include EDBI - a Singapore government-linked global investor, and Pavilion Capital - a Singapore-based investment institution which focuses on private equity investments, that made strategic investments in August and October 2019 respectively, to support the Group's further expansion globally. For more information, please visit www.cityneongroup.com.
﻿
World Heritage Exhibitions Founded in 2020, the World Heritage Exhibitions team has a combined 50 years of experience producing, promoting, and designing the biggest blockbuster exhibitions in the world. Our mission is to be the world leader in cultural experiences, producing the finest quality experiences that captivate, educate, and inspire people throughout the world.
﻿
Houston Museum of Natural Science The Houston Museum of Natural Science - one of the nation's most heavily attended museums - is a centerpiece of the Houston Museum District. With four floors of permanent exhibit halls, and the Wortham Giant Screen Theatre, Cockrell Butterfly Center, Burke Baker Planetarium and George Observatory and as host to world-class and ever-changing touring exhibitions, the Museum has something to delight every age group. With such diverse and extraordinary offerings, a trip to the Houston Museum of Natural Science, located at 5555 Hermann Park Drive in the heart of the Museum District, is always an adventure.
﻿
﻿
﻿
Contact Details
﻿
Cityneon Holdings
﻿
Wong Yi Lin - Head, Corporate Relations
﻿
+65 6571 6338
﻿
ir@cityneongroup.com