No Dogs Left Behind (“NDLB”) desperately needs funds now to evacuate from China more than 100 dogs to make room for rescues from Yulin, the site of an upcoming dogeating festival in June. This nonprofit organization is flying to New York City another 27 slaughterhouse survivors from Beijing on Mon., March 1, 2021. 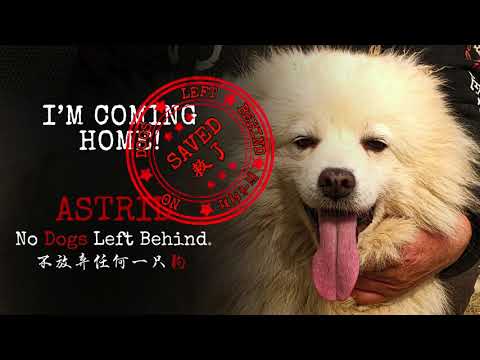 You can help by donating money or adopting a dog from NDLB, which has evacuated 256 survivors since Covid began.

“Funding is really key to evacuate the survivors that are there so we could save more lives,” said Jeffrey Beri, founder of NDLB, formed in 2016. “We fight the good fight, 365 days a year we work with brave activists and volunteers exposing the Yulin dog trafficking that is taking place. Reckless slaughtering of animals is what caused the pandemic. We believe it’s time for change.”

The 27 additional dogs that are arriving at JFK were all saved from the controversial dogmeat industry in certain China cities, where these animals are killed for consumption. Most of the survivors have been adopted by US families, who have waited months because of the pandemic to meet their new dogs.

No Dogs Left Behind volunteers, adopters and some of the slaughterhouse survivors at the last JFK transport on Mon., Feb.15, 2021.
﻿

Yulin is the site of the annual horrific dogmeat “festival,” where dogs and cats in cramped cages are tortured and eventually slaughtered for food. NDLB alongside local volunteers and brave activists intercept trucks in China bound for this festival as well as slaughterhouses. Money is never used to buy any dogs, said Beri, because “purchasing a dog kills 10 more.” Instead NDLB allied forces demand the trucker to provide proper legal documentation – as well as health and quarantine certificates – for each canine, which they cannot. And because the fines would exceed the cost of the dog, the traffickers eventually hand the animals over to activists.

“I will be leading the way to end – to end – Yulin,” said Beri. “I chose to fight the fight with dogs because dogs to me are my best friends.”

Beri said a recent Chinese slaughterhouse shutdown saved “hundreds upon hundreds” of golden retrievers, German shepherds, poodles, corgis and other breeds. “365 days a year dogs are being slaughtered,” he said. The current survivors need to be adopted out in order to make room at the sanctuaries for those dogs destined for Yulin.

Details for the media:

The media is welcome to experience this powerful event joining survivors with their families.

﻿
About No Dogs Left Behind: No Dogs Left Behind operates boots on the ground in China, fighting on the frontlines to rescue dogs from the illegal dogmeat trade. They work hands-on with local activists through emergency response, pulling dogs directly from slaughterhouses, dogmeat trucks, wet markets and traffickers. Their mission extends beyond borders, advocating for the creation and enforcement of animal welfare laws, and raising awareness for a cruelty-free, sustainable world in which no animal is violated, exploited, tortured or slaughtered for commercial goods or profit. With nearly 500 survivors in their care, No Dogs Left Behind operates sanctuaries in Dayi and Gongyi, China.
﻿
﻿
﻿
Contact Details
﻿
Sherry Chen
﻿
+1 855-665-0888
﻿
sherry@nodogsleftbehind.com
﻿
Company Website
﻿
http://www.nodogsleftbehind.com